The valley of the kings 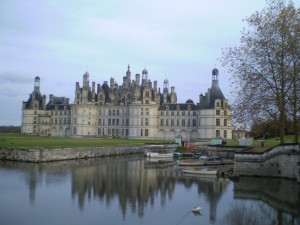 When one imagines a sojourn to France, the immediate destination of choice is Paris –  headquarters of romance, home to historical treasure chests such as the Louvre, and sanctuary of wine-lovers and foodies alike. But those who wish to appreciate the best of France’s cultural capital sans the less-than-welcoming Parisian attitude need not despair – just over an hour by train from the city of lights lies the World Heritage-listed Loire Valley. The idyllic towns of Tours, Chinon, Orléans, Amboise and Blois (to name but a few) lining the Loire river and its surrounds are home to friendly people, incredible history and gastronomic delights.

To do justice to myriad sights and experiences on offer, you’ll need to spend several days exploring. While public transport between towns is available, it can be rather inconvenient so the best way to get the most out of the Loire is to hire a car or bicycle.

The Loire is best known for the châteaux and vineyards that line its rivers and dot the rolling countryside. Most tourists tend to start at the centrally located university town of Tours, which is situated at the meeting point of the Loire and Cher rivers. Visitors can stroll the winding streets lined with Renaissance-era buildings, visit boutique museums that house the works of French masters, marvel at the stunning Cathédrale St-Gatien, and enjoy a glass of the region’s famed Vouvray wine in one of the terraced cafes of the historic Plumereau Square.

A leisurely bike ride or short drive from Tours is the spectacular Azay-le-Rideau. On a small island on the Indre river, it is one of the oldest French Renaissance château. Slightly further afield is Villandry, the most visited château in France. The castle has an historically significant setting (it is believed to be on the site of peace talks between King Philip II of France and Richard I of England, and was acquired by Napoleon Bonaparte for his brother in the early 19th century), but most visitors come here to stroll the incredible Renaissance-inspired gardens.

Chambord, the largest and most famous of the region’s castles, is also easily reached from Tours. For those looking for a romantic way to while away an hour or two, the surrounding parkland and hunting reserve are best enjoyed from a horse-drawn carriage. Lovers of antique furnishings will appreciate the nearby château of Cheverny, one of the only fully-furnished mansions in the Loire. For those who love their trivia, Cheverny was the inspiration for Captain Haddock’s home in the Tintin comic series, and its grounds can be explored by foot or from the spectacular heights of a hot-air balloon. 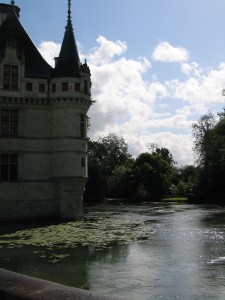 For fans of medieval French history, Orléans and Chinon are not to be missed. Joan of Arc liberated Orléans (once the second largest city in France) from the British in 1429. Its people still pay homage to their heroine by exhibiting her house and hosting a Joan of Arc festival every northern spring.
Nearby, on the banks of the Vienne river, is the town of Chinon. Joan of Arc visited Chinon to acknowledge the rule of Charles the VII of France, who sheltered in the town during the Hundred Years War. Those whose interest lies in popular culture as well as history should visit the enchanting Château d’Ussé, nestled at the edge of the Chinon forest. This castle is believed to be the inspiration for both Charles Perrault’s and Walt Disney’s Sleeping Beauties.

While many tend not to venture beyond the more popular towns and their surrounding châteaux, those who stray off the beaten track and base themselves in charming Amboise or Blois are rewarded with a more authentic experience.

The château of Amboise is in itself stunning: built by Charles VIII, Louis XII and François I, the castle is perched above the town, its spiral turrets often bathed in sunshine. But it is the white stone houses and picturesque patisseries of Amboise that capture the imagination of thousands of visitors. The town is steeped in the history of its most famous resident, Leonardo da Vinci, who spent the last years of his life in the mansion Clos Lucé and was buried in the Château d’Amboise’s Saint-Hubert Chapel. Those who appreciate salacious gossip with their history will enjoy a visit to the nearby Château de Chenonceau, known as the Ladies’ Castle, which was inhabited by several infamous wives and mistresses of French kings. 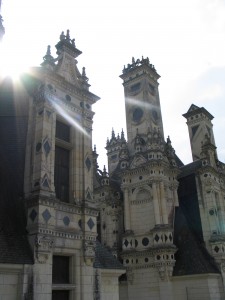 Blois, built over several steep hills, is also dominated by its Renaissance château, which looms in the centre of the town. For those who are fit enough there is nothing quite like the beauty of the town as you wander through winding streets, uneven staircases and steep hills.

But the Loire is not just known for its châteaux – it is also considered an epicurean destination. The region is a turophile’s delight, offering up a variety of goat cheeses: the famed Sainte-Maure de Touraine, an aged hard and crumbly cheese from the Touraine region; the cone-shaped Pouligny-Saint-Pierre, which is spreadable and has a nutty, sour taste; and the most popular of all, the Crottin de Chavignol, which has made the small village of Chavignol a gourmet destination.

Local restaurants serve up a rich selection of salted and cured meats and terrines, and during hunting season boar, venison, duck, pheasant and quail are on the menu. The region’s signature dishes include the poulet en barbouille (chicken cooked in brandy and served with a blood, cream, yolk and chopped liver sauce), carpe au vin rouge (carp in red wine sauce), gâteau pithiviers (almond cream in a buttered puff pastry) and the renowned tarte tatin (an upside down caramelised apple tart).

The Loire Valley is incredible at any time of year but it’s best to avoid July and August, as holiday crowds overwhelm the towns. Many recommend a visit in the late spring, when the valley’s lush greenery and spectacular gardens are at their peak. But the autumnal sight of a carpet of fiery red, ochre and yellow leaves lining the banks of rivers and swathing churches and castles is one that will astound even the most seasoned of travellers.