One of Australia’s most promising and versatile artists, Brendan Cowell has made a name for himself with his dark, dramatic works. 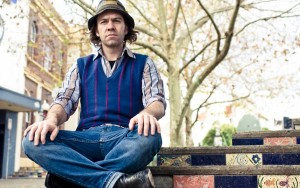 For many creative types, the toughest part of the job is the reviews. Forget a fumbled line, wild musical note or bout of writers’ block, the Sunday newspaper is what can make or break careers. While some profess they don’t read them, there’s no fooling anyone – with egos the size of Western Australia, they’d be hard-pressed not to have a peek. Most, however, wish they hadn’t.

Despite offering what they profess to be their souls, artists can see their work discarded by critics in the blink of an eye, reduced to a mere quip about their dogs producing greater works of art at the local park. For writer, director and actor Brendan Cowell, 33, the seeming disregard for the sacrifices made deserves its own  prompts a defensive tongue-lashing / pompous.

“It disturbs me how cruel and vicious, personal and vitriolic they can be,” slams Cowell. “All we are trying to do as artists is hold up mirrors, talk about things, provoke and help. Yet critics often review us like we’ve cut up their pets. This reeks of their disquiet, not the work. I also wish they’d review what they saw, not what they believe they should have seen.”

But while Cowell expresses outrage, he is not one who has faced the poison pen often. His most recent offering, Ruben Guthrie, was lapped up by critics. Staged at Belvoir St Theatre, the semi-autobiographical play followed the experiences of a young creative director at an advertising agency as he enters Alcoholics Anonymous.

Cowell penned Ruben Guthrie during 11 months of self-imposed sobriety, and says it appealed to his interest in the world of the extreme and the intention behind people’s actions.

“Writing is seemingly quite a presumptuous thing to do, arrogant even,” muses Cowell. “In the act of writing we assume the world is begging to know our thoughts. But for me it is more an investigation of extremes. Examine how we behave in certain situations and why?

“Writing is a way of feeling behaviour, of following a stingy line of curiosity until something arises out of the fog – something you always knew was there but couldn’t see so clearly. If the writer can touch on that thing, that stingy organism, maybe the reader will too. Then maybe, just maybe, the words were not wasted.”

While his literary offerings are – at least in recent years – more prolific, Cowell is best-known to audiences for his acting. After being rejected three times by NIDA, Cowell was eventually accepted and has since appeared in a range of film, television and stage productions, including the Logie-winning drama series Love My Way, SBS spoof Life Support and the lead role in last year’s production of Hamlet at the Sydney Opera House.

In a performance of the dark prince that was praised for its restrained intensity, Cowell at times found the weight of the task overwhelming. But his bizarre pre-show ritual may have eased the pressure.

“I arrive at the half-hour call. Have a shower. Pump up the music and pace round my dressing room like a bull. Go over some of my lines; maybe have a small chat to a couple of cast members, dig out some collective ideas on improving on last night’s show, slam down an orange Powerade and head out there. I should write a technique book!”

But while audiences appear to love his wild, brooding persona on stage and screen, Cowell confesses that writing will always be his true passion.

“I don’t know if I will act all my life or not because I don’t know if I will be cast in things my whole life,” he admits. “I love acting though, especially within the theatre. It’s a healthy antidote to writing, which is incredibly solitary and often quite lonely. Acting is interactive and social, it’s good for the mental health.

“I know I will write my whole life. I write for survival and I become unhappy when I’m kept from my writing.”

Not content to limit himself to acting and writing, Cowell made his directorial debut on the main stage of the Sydney Theatre Company last year when he brought British drama Rabbit to Australian shores. This followed a brief – perhaps too brief – stint as the artistic director of the STC’s Wharf2LOUD emerging theatre-makers program in 2006 and 2007.

“I’m very proud of my tenure at the company,” Cowell reflects. “We created the PUSH plays and every month or so the theatre would be jammed to the walls with 18-25-year-olds, lining up to see fresh, cheap theatre that finally spoke to them.

“They say you can’t get young people to the STC – well, we did! The ball seems to have been pretty much dropped since I left, which makes me pretty sad.”

Cowell claims his ideal world includes one where everyone goes to the theatre two or three times a week, sparking conversation about topical issues and how to make an impact. But when asked if he sees his own work assisting the local arts industry to grow in terms of public perception, he hesitates.

“I’m not sure if we’re at the stage yet where we can make a difference to mindset. Unfortunately we are pre-impact. Right now it’s about claiming back some importance in the grand scheme of things.

“Our film industry is no longer a crucial part of the culture, our theatre is seen as elite to the majority of Australians, and so for me it’s about sparking a new conversation with the Australian people, and earning their respect and their interest again. Then we can talk about helping and growing and state of mind.”

Though he has been labelled a workaholic and creative machine, Cowell has no desire to slow down. The former Cronulla boy who divides his time between Newtown and New York, where his long-time girlfriend, actress Rose Byrne resides, recently finished filming the romantic comedy I Love You Too with Megan Gale and is scheduled to appear in Jeremy Sims’s Beneath Hill 60 about tunnelling during World War I. Add to that penning a Bollywood film, Save Your Legs!, starring in a Hollywood production and finishing a partly-written novel about friendship, and Cowell has his work cut out for him.

But he believes it’s just another essential part of his existence.

“I’m in love with what I do, and I know some of my works are better than others but I’m doing my best and listening and learning every day. Art makes me.”

← High adrenaline / Picking up the pace
The Life of Bryan →